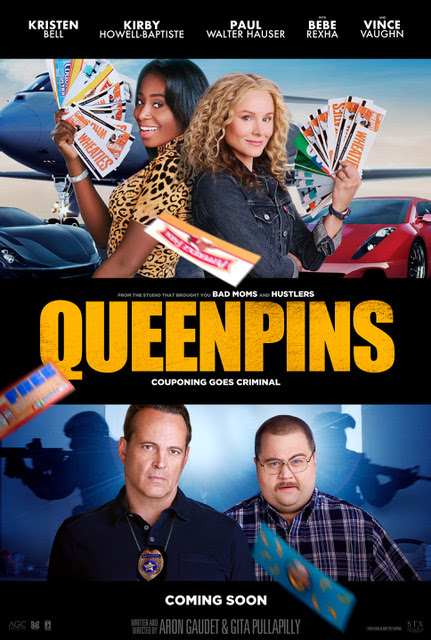 We had the pleasure of reviewing the upcoming comedy QUEENPINS from STX Films, releasing this Friday in select theaters nationwide. Read on below for our review, and be sure to head to the theaters this weekend for some guaranteed laughs! QUEENPINS releases in select Cinemark Theaters nationwide on September 10, and streaming on Paramount+ September 30.

Inspired by a true story, QUEENPINS is an outrageous comedy about a bored and frustrated suburban homemaker, Connie Kaminski (Kristen Bell) and her best pal JoJo Johnson (Kirby Howell-Baptiste), a vlogger with dreams, who turn a hobby into a multi-million dollar counterfeit coupon caper.

It all starts when Connie discovers she can take control of her life – and save piles of cash – by ensuring she gets a discount for everything at her local supermarket. After firing off a letter to the conglomerate behind a cereal that has gone stale and receiving an apology along with dozens of freebies, Connie and JoJo hatch an illegal coupon club scheme that sees them scam millions from mega-corporations and deliver deals to legions of fellow coupon clippers. Their brainstorm escalates into a money making machine involving a warehouse in Mexico that prints all coupons, a brilliant cyber-thief (Bebe Rexha), a massive stash house, and an elaborate money laundering system involving a fleet of Lamborghinis, a cache of high-powered weapons, and a cadre of fearsome militia men. Meanwhile, a hapless Loss Prevention Officer Ken Miller (Paul Walter Hauser) at a supermarket chain victimized by the two women joins forces with a determined U.S. Postal Inspector Simon Kilmurry (Vince Vaughn) in hot pursuit of these newly minted “Queenpins” of pink-collar crime.

At its core, the film is about two sets of hilarious duos. First up is Connie and JoJo, played by Kristen Bell and Kirby Howell-Baptiste. If you’re a fan of Veronica Mars, then you already know that Bell and Howell-Baptiste make quite the onscreen pair of badass women. Now they’re back and teaming up in a much less conventional way. Though their characters this time around are a huge departure from the women they play on Veronica Mars, their chemistry in the film remains as strong as ever. Both women suffer huge losses and are both in a rut at the beginning of the film. You can see how much each longs for a different life and a change from where they are currently at. I felt this so hard, and found both women extremely relatable. They aren’t your typical protagonists, and each came with a lot of flaws, but this really just made me root for them even more. Our second duo comes from the rule-following, law-abiding characters Ken, played brilliantly by Paul Walter Hauser, and Simon, played by Vince Vaughn. While Vaughn’s performance was great, Hauser truly stole the show. Every scene he is in is just comedic gold. The two made for an unlikely pairing in the film, but you can see that Ken really grows on Simon, and they slowly form a bond and level of trust that ultimately leads to their success.

I think what I loved about the film is that it comfortably stayed in the grey area. It’s definitely not a black-and-white film. Lines are crossed, the right answers seem blurry, and I found myself rooting for the characters doing the wrong things. That’s also how life is though. We aren’t always dealt the hand we wanted, and oftentimes find ourselves in a place we didn’t expect, and ultimately grow to resent. I think you can really take away a lot from this film. Despite what the women did being illegal, they were actually very smart and clever to have thought to do what they did. Disclaimer: NOT condoning it, please don’t do anything illegal! But if you strip away that aspect, it’s pretty badass how they took the narrative back in their own lives and succeeded – while it lasted. This is a super fun film, hilarious, and doesn’t take itself too seriously. It’s a film that I feel will be pretty universally liked by all. Audiences of all types will enjoy this one!
QUEENPINS releases in select Cinemark Theaters nationwide on September 10, and streaming on Paramount+ September 30.

To see more about the film, you can visit their socials: