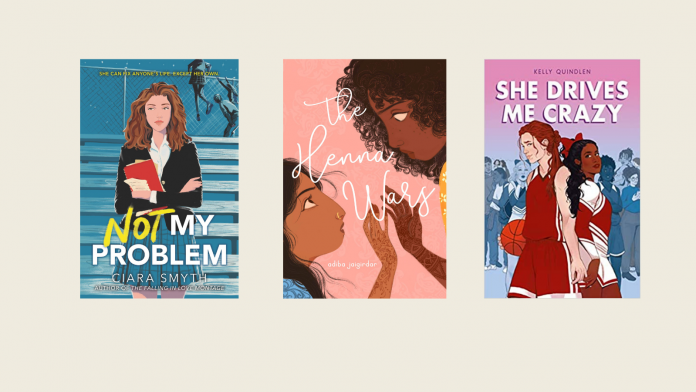 I was thinking about the queer books that I’ve read this year when I realized I’ve read another sapphic YA novel featuring enemies to lovers trope. A classic trope that I love a lot.

There’s nothing more satisfactory than reading a book about two characters who have a long history of conflict between them, two people who hate each other’s guts because of unfortunate events that transpired between them. The following books: Not My Problem by Ciara Smyth, She Drives Me Crazy by Kelly Quindlen, and The Henna Wars by Adiba Jaigirdar each have their own take of the “enemies to lovers” trope. (With that being said, romance is not the primary focus of the following books above. Romance is simply another facet of a layered plot. )

As my first novel by Smyth, Not My Problem is a stellar introduction.

The story follows Aideen, who suddenly became “the fixer” of her school campus. After pushing her nemesis Meabh down the stairs, their grade’s no. 1 overachiever, Aideen transformed herself into Otis from Sex Education. Aideen has gained a following and is now helping “clients” to fix their problems in return for favors.

Readers could expect: a loner heroine, who gains a meaningful friendship due to her new status as the fixer. The story focuses on a band of high school misfits unexpectedly forming a bond while solving their peers’ problems. Expect hilarious dialogues and heartwarming moments.

Romance: it’s the classic opposite attracts, the love interest Meabh has been described as “the intense overachiever type, with no hobbies other than winning. The girl who will either run the world or become a supervillain dedicated to destroying it.” And then, there’s the heroine Aideen who’s just trying to graduate high school; quite relatable as well. A little back story: Aideen’s former best friend was the biggest Meabh anti, so as an extension Aideen was kinda a Meabh hater too.

After seeing Meabh have a panic attack during PE class, Aideen offered to solve the overachiever’s problems. Conclusion: the heroine will push Meabh down the stairs so her father could cut her some slack.

Plot: Not my Problem explored the intricacies of poverty, abusive parents, and parental expectations. Smyth did a great job of exploring the hard-hitting topics while also balancing the story with humor. But please, proceed with caution if those three themes trigger you.

Overall: Not my Problem has a delightful cast of characters and charming romance; this is a well-conceived coming-of-age novel.

The Henna Wars is not exactly enemies to lovers trope but more of a rival to romance pairing.

The story follows Nishat, who started a South Asian theme henna business for her school project, where her business rival is her crush, Flavia.

Readers could expect: complicated parental portrayal. The story delved about Bengali norms and traditions ad how it pertains to Nishat’s family who migrated to Ireland. The novel also explored cultural appropriation, in terms of why it’s harmful. Jaigirdar incorporated how our cultural identity shapes us all.

Romance: As I said, the romance is more of a rival to lovers. Flavia is the cousin of Chyna, who hates and bullies Nishat. So, there is an extra added tension for the heroine who has a crush on her business rival. There will be misunderstandings between Nishat and Flavia, which of course is part of the friction, but rest assured it will be fixed. It’s a soft romance between two girls who bonded over their similarities and differences.

Plot: The first main hurdle for the heroine is that her parents couldn’t accept she’s lesbian. Secondly, the love interest being related to Nishat’s bully and starting a henna business for profit without understanding the cultural significance of henna. I like that the author concluded these barriers on a positive note. Also, I love love the sisterly bond between Nishat and her sister.

Overall: The Henna Wars is an emotionally charged and resonant novel. The story tackled a handful of relevant themes such as being a Bengali immigrant in Ireland, being lesbian in a Muslim household, being outed without the heroine’s consent as well as homophobia, racism, and cultural appropriation. Added bonus: the f/f rivals to lover’s romance.

When I saw the book cover for She Drives Me Crazy, I just knew I have to read it. Suffice to say, this novel did not disappoint.

She Drives Me Crazy follows the story of basketball player Scottie Zajac, who was caught in a fender bender with her nemesis Irene Abraham. The mothers of the two characters forced the teenagers to carpool together. Cue: two characters who hate each other’s guts. Proximity. Tension. Bickering. This is a textbook definition of enemies to lovers but it only gets better when Irene was hired by Scottie as her fake girlfriend—to make her ex-girlfriend jealous. Another legendary trope: fake dating with a classic YA drama twist.

Readers could expect: a healthy portrayal of family dynamics. I always find it refreshing when parents are painted as supportive of the main character. In addition: Scottie and Irene have amazing friends that add vibrant chemistry to the plot.

Romance: The romance of She Drives Me Crazy made me giddy, maybe because it was a culmination of several tropes such as opposite attracts, enemies to lovers, and fake dating. Readers could expect a lot of bickering and sarcasm.

Plot: albeit, the romance was the best part of this novel; the author did a spectacular job of ensuring the romance and characterization of the heroine was not rushed. Scottie is still recovering from her previous toxic relationship. The story showed how the main character is healing from trauma.

Overall: I love how She Drives Me Crazy subverted the heteronormative cheerleader and basketball pairing we traditionally consumed in the 90’s. Quindlen wrote a charming romantic comedy. A great YA novel about teenage romance and moving forward.