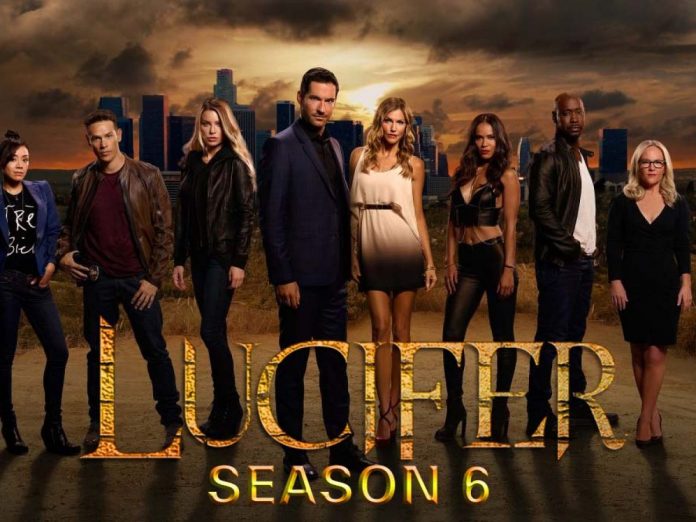 On Saturday, Luke Cook (Chilling Adventures of Sabrina) sat down to discuss all things Lucifer with leading man Tom Ellis (Lucifer Morningstar) as well as executive producers Joe Henderson and Ildy Modrovich as part of SDCC@Home.

SDCC@Home also announced the sixth and final season of Lucifer will premiere September 10th only on Netflix!

It has been a year and a half since the final season was shot, a season that initially was not meant to be. Season 5 was actually supposed to have been Lucifer‘s last, hence part of the reasoning behind Dan’s (Kevin Alejandro) demise-the details of which all three agree came in part from Kevin himself! Luke was interested in the final “musical” episode of Season 5, in particular how the songs performed were chosen. Ildy was quick to point out that the story came first with the songs built in and around quite “organically”. For example, Ildy literally found herself googling “going to Hell” in search of songs to correspond with Dan’s death and his soul’s ultimate fiery eternal destination. Initially they did not expect to receive the rights to include their top choices of tunes but according to Tom Ellis, they actually were quite successful at this in the end. He stated, “We dreamed a dream and we got it!”-a clever pun referring to the duet the actor shares with Dennis Haysbert (God) of the Claude Michel Schönberg classic from Les Misérables. This Season 5 scene takes place in Lucifer’s penthouse which just so happens to be Tom’s favorite set in which to film. Joe and Ildy agreed that as far as the crew was concerned there was not a “dry eye in the room” during the filming of this particular scene.

So, what are we in for with Season 6?! Well the three were quite tight-lipped but here are a few things that Luke was able to squeeze out:

In the meantime Lucifans, re-watch the trailer above for more hints of what is to come and be sure to watch the sixth and final season of Lucifer available September 10th on Netflix.