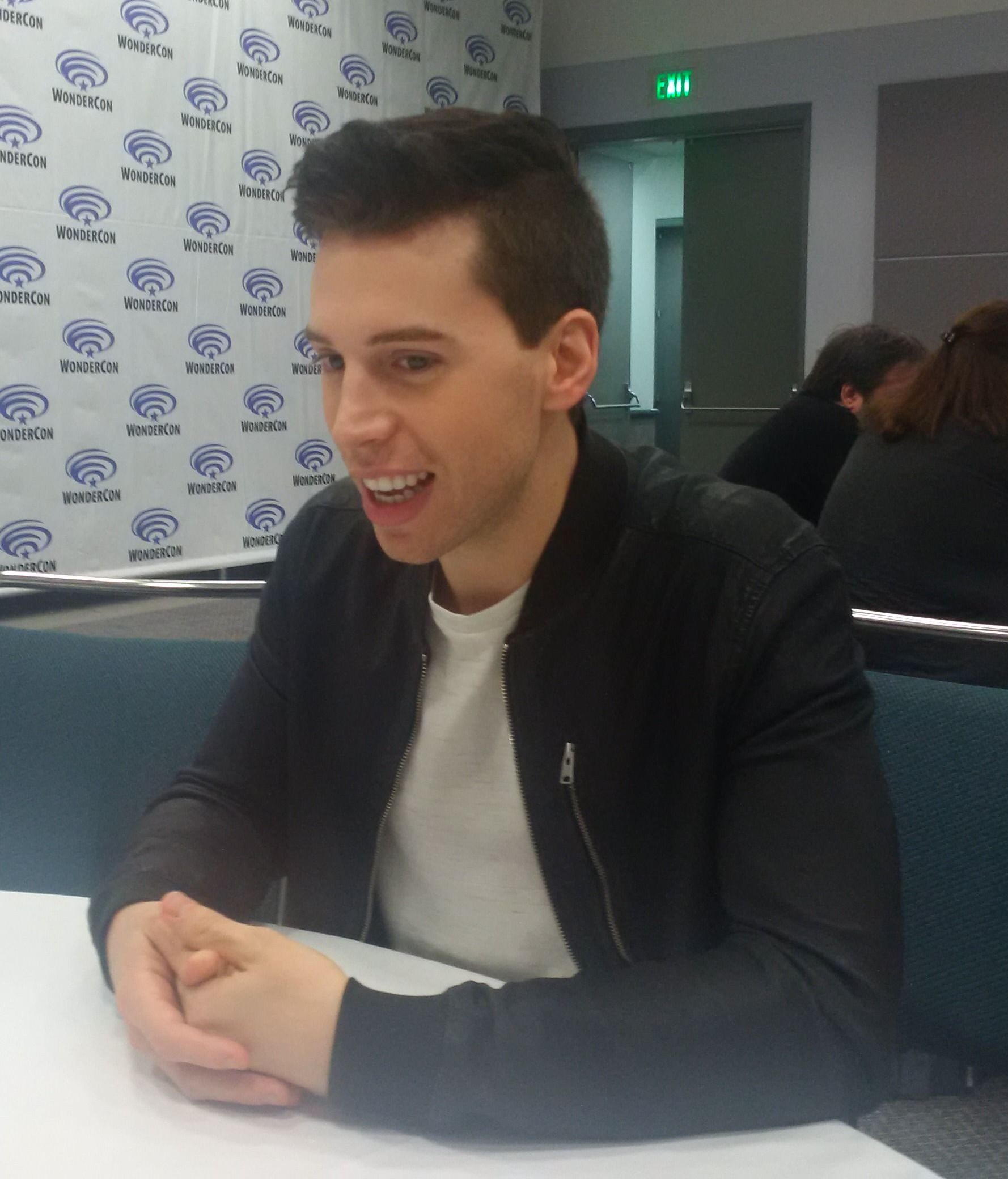 With Orphan Black premiering Thursday April 14th on BBCAmerica, the Clone Club has reason to be excited. At Wondercon, co-creators Graeme Manson and John Fawcett were joined by Jordan Gavaris (Felix), Kristian Bruun (Donnie), and Kevin Hanchard (Detective Art Bell) for a Men of Orphan Black panel, but the women – or specifically, the woman of Orphan Black, Tatiana Maslany, was still very present thanks to the effusive praise on behalf of her co-stars.

“When we set out to make this show, we wanted to make a show that you just didn’t know which direction we were going to go in next,” Fawcett said. “And it was going to be that kind of thrill ride and left turn and down the rabbit hole sort of vibe. And so there’s certainly that in spades in season four.”

“This year we’ve really got something pretty cool in the bag and something that’s pretty different from other seasons,” Manson added.

Orphan Black has always had an emphasis on fantastic supporting female characters ranging from comedic to downright scary, so fans should be pleased that Susan Duncan (played by legendary actress Rosemary Dunsmore), who was introduced at the end of season three, features heavily this season. Jessalyn Wanlim’s character being introduced this season is also wonderfully villainous, say Manson and Fawcett.

But although Fawcett and Manson think they’ve been blessed with their amazing supporting cast, Orphan Black is “Tat at the core,” Fawcett asserted. “When actors or any member of the crew comes to our set, they see how hard she works and how seriously she takes this, and how gracious she is throughout the whole process, however hard she works. That sets the tone for our show. And this year we’ve got some great new supporting cast.”

“We were excited that she was nominated for an Emmy,” Fawcett said later. “That was a big deal for the show and for her.”

“I wish she had won,” Hanchard declared. “I’ll go out and say it, because when you see first hand how hard she does work, and I think that she deserves it.” And after four seasons together, it’s no surprise that Maslany inspires such incredible praise and loyalty.

“She’s doing some of the best work on television,” Hanchard continued, “and as Graeme and John say, she really does set the tone, because if you’re having a terrible day, and you want to walk in on set with your arms folded and start shitting on people, how can you do that when Tat is playing eleventeen people and you’ve got a one page scene to do? Like, you just can’t do it. So she deserves Emmys, she deserves the democratic nomination. Like, God bless her, man, she’s great.”

The ensemble and collaborative nature of the show isn’t just present in the constant praise the actors give each other, but throughout the showmaking process. When asked how they come up with new clones and how the creative process works, Manson and Fawcett state bluntly that they consult with Maslany.

“It’s a clone show. We want new clones. Tat wants new clones,” Manson said. “Once we’ve got a loose idea of what we want the character to do, we take that to Tat.”

“Tat’s kind of a sounding board for all of this,” Fawcett added. “We want to challenge her, but we also don’t want to kill her, and we want it to be something that she believes in also. She’s the one that has to breathe life into the character, and that’s part of the collaboration of the show.”

And there will be new clones this season, as well as old ones. The four minute teaser released last week previewed both, featuring Beth, and a new clone wearing a creepy bunny mask. Hanchard revealed that there will be more flashbacks involving Beth throughout the season. “There was like a breadcrumb trail that was being laid in season one, and we sort of got more of taste of it last season and for the show this season we’re going forward,” he stated, “But I think in order to do that we have to sort of figure out where we’ve been, and we get to do that this year, so we can find out a little bit more about that history and that past. Not just with Art, but with everybody.”

Perhaps one reason for the look to the past is that Detective Bell is now a member of Clone Club, which allows him to be a part of the narrative in a different way. “It’s kind of cool,” Hanchard remarked. “Because in season three, because he wasn’t in the know, there was a lot that he wasn’t able to see, so he’s on the periphery a little bit. But now that he’s fully immersed in the story, I know for me playing the role it was great to sink my teeth into the stuff that others had been really into for awhile. I’ve always had the notion that Art sort of represents the audience of the show. He’s sort of an observer of all the craziness that’s going on,” he continued. “I think people are going to get a kick out of the stuff that he gets to see and the things that he gets to do this season.”

But Art isn’t the only character who will see craziness this season. Surprising no one, Bruun promised that the antics that Donnie saw last season will not only be matched, but surpassed. When asked if he was surprised by the shenanigans the writers invent for him each season, Bruun’s response was surprisingly nonplussed. “I’m not surprised because every season I go to the writers like, I bet you guys can’t top the twerk scene. I bet you can’t top this scene. I kind of goad them into topping everything that they do, and they do, and I know they’re going to do it anyways, because they love to see Donnie in crazy situations. They love to see bad things happen to him, and they deliver every season. I always have a ton of fun stuff to do, and this season especially there’s like, three maybe four crazy, crazy moments with Donnie that were so much fun to film.”

Some of those moments are likely to involve Helena, who Bruun laughingly describes as Allison and Donnie’s “new roommate.”  Brunn describes Helena’s presence in the Hendrix house in the following way: “She’s pregnant and very hungry all the time. I think the grocery bills have really skyrocketed with her in the house. Yeah, there’s definitely some more hijinks with Helena. She’s so much fun to play with as an actor and as a character so we had a really good time exploring that dynamic last season, and we get to further that with her in the house. She’s a crazy, crazy roommate, but I think fans will really enjoy that.”

Felix’s journey this season will be a little different, as previewed by Gavaris. “Well, he and Sarah, they’re in an interesting place,” the actor related. “He needs to sort out what the revelation that Sarah is related to S and related to Kendall, what that means for him. Because a great deal of their relationship hinged on the fact that they were both outsiders, the fact that they’re orphans, waywards, and now Sarah isn’t, and Felix still is.”

In terms of the mysterious man Felix was seen dancing with in the Orphan Black teaser, which Gavaris asserted the majority of people seemed to want to believe was a Felix clone, the actor was quick to shut down those rumors. “Yeah, they were like, ‘Oh my god he’s dancing with himself!’ and I was like, ‘Guys. He’s really not. We’re good, we’re not that good.’” But as for that mysterious man was and what he means to Felix, Gavaris was mostly silent.

However, on the subject of Felix’s love life, he did have this to say:

“So here’s the deal with that. I was driving that idea and I was really championing that for some time because as an actor I was so juiced at the opportunity to have that kind of romantic intimacy, because it’s very private, and I hadn’t gotten the chance to do that with him yet, but ultimately I realized that that was something I wanted, that Jordan wanted for him, because I love him so much, but I realized that’s not really what he needed or wanted. That wouldn’t be something that he would choose for himself necessarily. I had to embrace the idea that maybe being, a healthy happy well-adjusted gay man does not necessarily mean you’re in a monogamous relationship.”
Gavaris postulates that Felix wouldn’t need a monogamous relationship to be healthy, happy, and well-adjusted because it’s a need that is filled by people who aren’t his sexual partners, and specifically Sarah. “Ultimately, that was the conclusion we came to,” the actor shared. “He gets that intimacy he needs from other people, but he’s not getting it from Sarah right now, because he’s working out what they mean to each other, then he must be getting it from somewhere.”

For more stories from the author, visit Women Write About Comics!