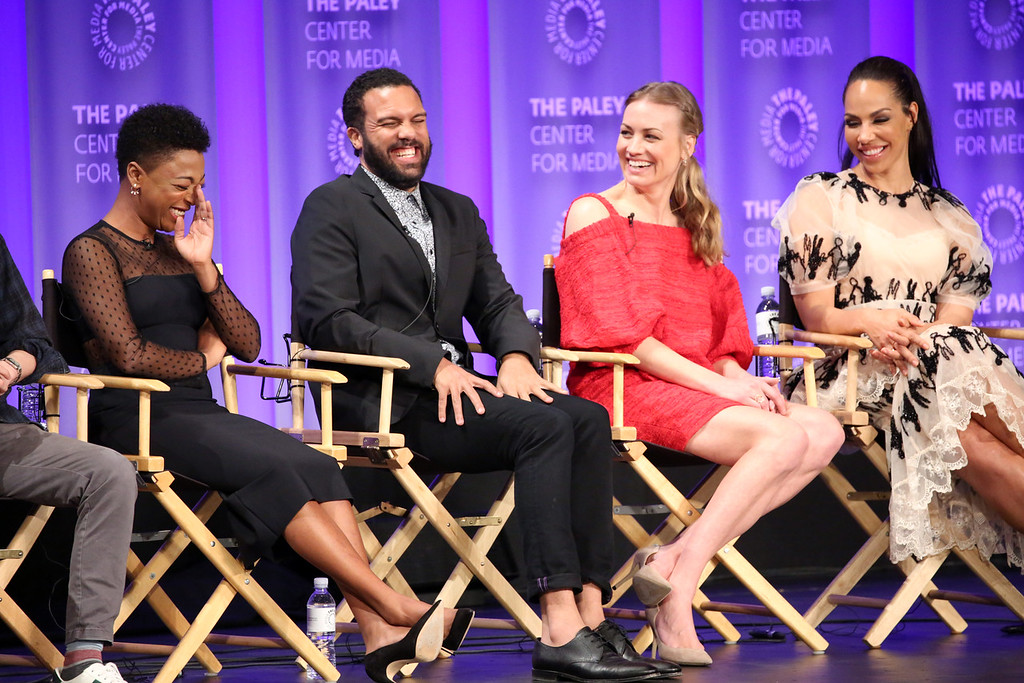 HNS attended the PaleyFest panel for The Handmaid’s Tale at the Dolby Theater recently where the cast and creators talked about the characters we love (and some we don’t!), diversity, what’s in store for season 2 and so much more. In attendance at the panel was Bruce Miller, Madeline Brewer, Max Minghella, Samira Wiley, O. T. Fagbenle, Yvonne Strahovski, Amanda Brugel, and Warren Littlefield. Check out what we learned below! Though Elisabeth Moss wasn’t able to join the panel, the cast and producers had plenty to say of her amazing performance as June/Offred. Something the Executive Producer credits is her endurance. There are days where not only is she in every scene, but she is in every shot. And she keeps going and handles the demands of the filming schedule incredibly.

Amanda Brugel has a very hilarious preparation process for her character, Rita. She said she uses two highlighters on the script… yellow is for good Rita and blue is for bad Rita. She takes notes. Bad Rita highlighter gets used more.

Madeline Brewer spoke about how much she enjoyed every small act of resistance in Season 1, and that this carries into Season 2. We will see Janine still looking to the bright side and not in the same way as Season 1.

Adaptation from book to TV show:

The Handmaid’s Tale was based off a novel of the same name by author Margaret Atwood. The novel has been adapted several times and has also been a movie and a play. The producers were given lots of creative liberty from the author, and they joked that Margaret gives more license than they are comfortable with. Margaret is also very involved. Margaret has told them that she can now only picture the characters she wrote as the actors.

The book is written as an all-white ensemble. In the book, Gilead sends everyone of color away. The creators weren’t comfortable with that for the show, so they incorporated more diversity. This is something that Samira feels is a conversation between the actors and the audience, not actors and show runners. People take the material from the show and have a conversation about it; they’re making progress.

Diversity & The Inclusion of Women:

It was important to the creators that women be appropriately represented on the show. It was a conscious decision they made to have the majority of directors of The Handmaid’s Tale be women. They acknowledge the great contributions by the men, but continue to find women who can carry the torch. Most department heads that run the show are women.

The cast spoke a lot about how the material and subject matter of the show hits close to the political climate of our country today. And there’s a lot of inspiration in all of this. Yvonne Strahovski spoke about how amazing it is to be inspired by people finding such activism through the show, and mentioned that there are even protesters that dress up as handmaids. Samira spoke about how her character Moira will always be on the forefront of this. Samira was bolstered and found courage to be more outspoken on her own beliefs as a result of playing this character. The show can elicit real change even if it is make believe. Madeline looks to portray something in an honest way. She felt empowered through her character Janine to read more stories of sexual assault survivors and to talk about her own Me Too story. The last thing the Executive Producers wanted to do was “mansplain” what to take away from the show.

The PaleyFest audience was treated to a significant amount of snippets of Season 2. These snippets left us wanting, NEEDING more. It’s quite torturous actually having to wait. A great way it was summarized during the panel was “if looks could kill.” I would have to agree that based on what we saw, this definitely applies.

We got a little insight into where each character is in Season 2. Here’s the rundown of what we heard:

Wanting to see more of the character’s backstories is something that proved to be common ground with the cast and producers. Samira Wiley would like to see more of Moira’s relationships, her family and her backstory. Yvonne Strahovski says that she is lucky to have seen a lot of Serena’s backstory already, but would be interesting to see the parents she grew up under to make her like she is.

A theme for Season 2 was revealed to be motherhood. Offred’s desire to connect with her daughter Hannah can be described as “explosive, volatile chess game,” says the Executive Producer.

Alexis Bledel has been upgraded to a regular cast member of the show, and is no longer a special guest. We will get to see her wife in Season 2! Another thing teased during the panel is that yes, someone will escape Gilead this season. But the Executive Producer would not confirm nor deny if that person was on the stage. This of course does not mean everyone is safe. When asked, the producers gave a resounding, “Oh no.” And elaborated that anyone could die. But in this world, the worst case scenario could be that you DON’T die.

Season 2 of The Handmaid’s Tale comes to Hulu on April 25th!