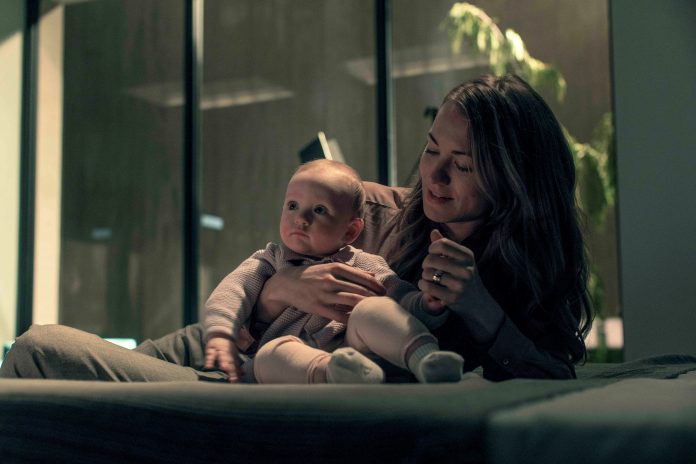 Still catching up on season 3 of The Handmaid’s Tale? The post below contains spoilers for episode 12! Check it out to get up to date on Gilead before the season finale airs this week! 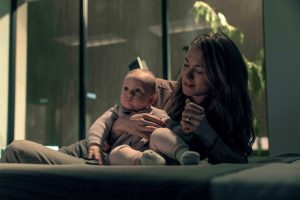 She hears a van pull up to the Lawrences’ house. She prepares to shoot whoever enters her room. But when the door swings open, it is only Eleanor. Mrs. Lawrence nervously tells June to leave the gun and go help Beth serve the visitors. June obeys.

When June enters the kitchen, Beth tells her that she heard back from Billy – the bartender at Jezebel’s. He’s in. The 52 children can leave on the cargo plane he’s arranged. In one week.

When June enters the room where the Commanders are meeting, they are discussing the Canadians’ arrest of the Waterfords. With Waterford and Winslow out of the picture, Calhoun and Putnam have turned to Lawrence for advice on what to do next. (They think Winslow is missing. It seems June isn’t going to have to use that gun today.)

At Loaves and Fishes, June updates Alma. The Marthas will bring the kids to the Lawrence house after sunset one week from today. Rita, the Waterfords’ Martha, catches June’s eye from across the store and they talk over the potatoes and carrots. Rita tells her she knows what June is planning – and she has volunteered to escort a child. She’s proud of everything June is doing. 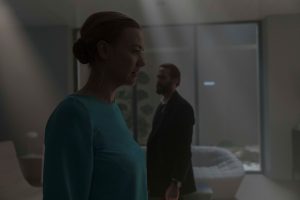 In Canada, Serena is allowed to visit Fred in his detainment room for 5 minutes. At first, he is determined to comfort her – saying that he will testify that she did nothing wrong. Serena tells him to worry about saving himself instead. Enraged, Waterford realizes that Serena set this whole thing up. Before she exits, she says she did it to be with Nichole. And that she will pray for him.

Back at the Lawrence house, Mrs. Winslow and Mrs. Putnam are praying with Commander Lawrence for the safe return of Commander Winslow. June finds Eleanor crying in the hallway and escorts her into the room to finish her prayers. Mrs. Winslow is concerned that no one is searching for her husband because everyone is focused on the Waterfords. She is worried that without her husband her six children will be taken from her. Eleanor blurts out that they will have plenty of room to save the children – referring to the super-secret cargo plane. June and Lawrence share a nervous look, but Mrs. Winslow seems to take the offer as another inappropriate interruption from the notoriously unwell wife. 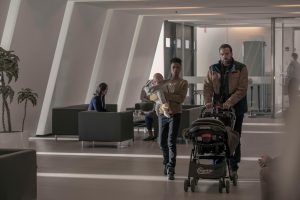 Moira, Luke, and baby Nichole enter the secure facility where Serena and Fred are being held. Luke just wants to see that the Waterfords are locked up.

Tuello visits Serena in her detainment room. She’s wearing pants now. They briefly talk about Fred, and Tuello says to forget about him. Nichole is here for her one hour visit. It will be timed. A representative from social services is there to observe everything. Moira says her piece when she enters the room to deliver Nichole for the visit. She wants Serena to know that Fred raped her at Jezebel’s and that Serena is a far worse “gender traitor” than Moira ever was. When Moria is gone, Serena finally gets her time to hold Nichole. But the woman from social services makes sure she doesn’t call herself the girl’s mother. We wouldn’t want Nichole to be confused, after all. 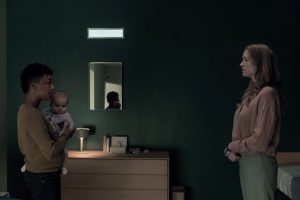 Back at the Lawrence house, Eleanor is desperate to help save the children and is ready to tell everyone in the neighborhood about their plan. June is pissed at Lawrence for telling her sensitive information. She sternly tells Eleanor to keep her mouth shut. Eleanor realizes her mistake and apologizes – she knows she’s not thinking clearly. Meanwhile, Lawrence has learned that the Commanders want to close the border because of the detainment of the Waterfords. Lawrence wants June to move up the date of the escape – but she tells him she can’t. He’s going to have to convince the Commanders to hold off on their retaliation against the Canadians for one more week.

Back in Canada, Tuello attempts to talk with Waterford. Waterford is bitter about being set up by Serena and doesn’t want to explain himself to Tuello. The American ambassador offers an alternative – June’s husband Luke has come to visit. The guard can stay for the meeting. Waterford agrees to talk to him.

Luke comes in. He has a binder. He knows Waterford’s history, and he’s prepared to make the man feel small. But instead of listening, Waterford tries to provoke Luke by talking about June. Luke punches him, and the guard quickly removes him from the room.

After her visit with Nichole, Tuello brings Serena pizza and a newspaper in an attempt to keep her happy in detainment.

Later that night, June finds Eleanor wheezing in bed. She’s taken too many pills from the bottle on the bedside table, wanting to end her own life. At first, June rushes to help her. But then she stops herself. She seems to realize that their chance of saving the children will be better without Eleanor. She kisses the woman on the forehead and leaves the room quietly – careful to make it seem as though she never entered. The next morning, Eleanor is found dead.

A grieving Lawrence wants to talk to June about Eleanor, and she responds empathetically with a story about Luke. Lawrence tells June he was able to keep the borders open. For now.

The community gathers for the funeral. When everyone is gone, June stays with Lawrence by Eleanor’s grave to comfort him. But when she makes this extra effort, he looks at her suspiciously. Does he think she had something to do with his wife’s death? We’ll find out this week in the final episode of season 3!