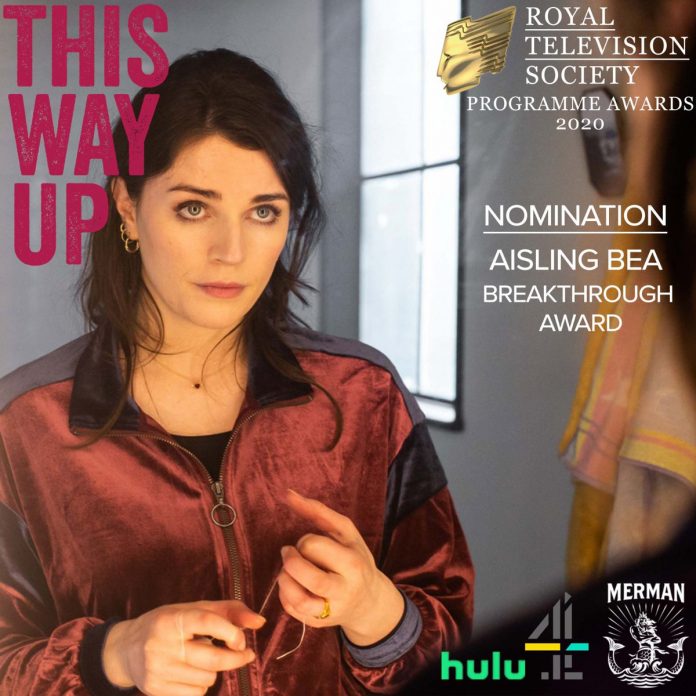 Written and created by talented Irish comedian/actress Aisling Bea -(Netflix’s Living with Yourself), the story revolves around a young Irish woman named Aine (Aisling Bea), who after a traumatic event is recovering from a nervous breakdown. It follows her journey and recovery to reconnect with her family, friends, and work colleagues.

The relationship that holds this dark comedic/drama together is the bond with Aine’s older sister Shona played by the equally talented Sharon Horgan (Military Wives) as she tries to support her younger sister during difficult times while balancing her work and personal life. Her fiancée is played brilliantly by Aasif Mandvi (A Series of Unfortunate Events). Aisling Bea and Sharon Horgan-who also produced the show with her production company Merman, both have natural, organic chemistry with each other which bounces off on screen and makes you believe that they are sisters, especially the banter between them.

This gets even better when they are joined by their mother played by veteran Irish actress Sorcha Cusack (Snatch) who has excellent comic timing with both, and that relationship is brought to the surface. This Way Up is a very genuine and endearing show which deals with the sensitive modern issues of mental health, suicide, immigration, family and loneliness, and how that can affect us in different ways. (Bea) shows that she can carry a show with self-deprecating wit and charm that has made her a popular name on the British comedy circuit.

What jumps out about this show is that every character, no matter how big or small the role, plays an important part and have depth adds extra dimensions to the story. It is not a coincidence it has been nominated for various awards. Supported by an excellent diverse talented British cast including: Tobias Menzies(The Crown), Indira Verma (Game of Thrones) and Kadiff Kirwan (Fleabag) all compliment the story. The ending leaves open fascinating possibilities where the 2nd series could go we can only hope that Channel 4 brings this comedy-drama back , it displayed good laughs, some dark moments, sincerity and genuine heart.

Liar examines the variables and scenarios that cause us as people to lie and some of the many consequences that come with it. Ask yourself a question do we tell lies to protect others or to just protect ourselves from the aftermath?

Set in a small coastal town in England from creators (Harry Williams and Jack Williams) the story centres around a gifted surgeon and widower Dr Andrew Earlham (Ioan Gruffudd) and respected, likeable teacher Laura Nielson (Joanne Froggatt) who recently broke up with her partner played by Warren Brown (Luther).

They are set up on a date with each other by friends and family, the events that transpire after that will not only change both Andrew and Laura’s lives forever but also reveal secrets and revelations that will send shockwaves throughout the whole town and reveal a web of deceit and treachery that neither could have imagined.

Liar delves into the aspect that we as people/human beings can put on different masks, one for our family, friends, colleagues and loved ones. There will always be consequences to a lie in one shape or form, so the questions that are asked is could you live with it? This is part of the story the show delves into, the fine line between the good and evil of everyday people, a sad truth that is part of human nature, you can choose as an individual to lie to others but you can never lie to yourself.

This Way Up Series 1 is available on all Channel 4 digital platforms and on Hulu in the US.

Liar Series 1 and 2, is available on all ITV digital platforms, and on Sundance TV in the US.