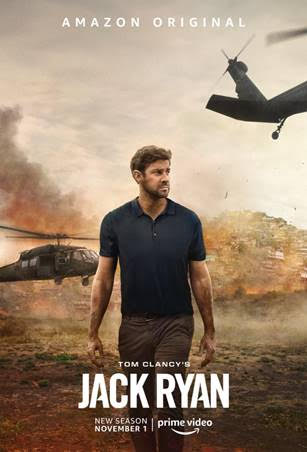 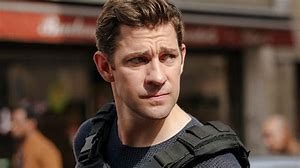 Fans of Tom Clancy’s Jack Ryan were given special treats last weekend at NYCC.  First, a sneak peek of Season 2 with the full premiere episode and second, a panel with Mr. Ryan himself, John Krasinski.  It was loud.  It was epic.  It was suspenseful and it was hilarious. Because, you know, Krasinski.  I won’t spoil Season 2 for you, but here’s what I can say: 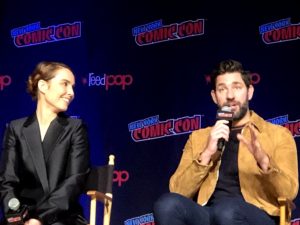 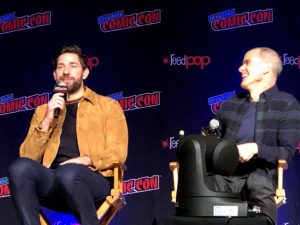 Krasinski said the addition of these two was part of his “dream cast” and he was beyond thrilled to have them join the team.  Rapace and Kelly seemed to be equally thrilled to join.  Kelly said he joined because John seemed “like a fun dude to hang out with.”  And of course with a name like Mike November,  you can’t go wrong.  Kelly describes his character as “a guy who changes throughout the season. He is the Chief of Station for the CIA so he’s a pretty serious guy.  He has a job where he has control and then this happens (“this” is a spoiler, you’ll have to watch!)”  Most important take away from Kelly at the panel is that he told Krasinski that Emily Blunt (Krasinski’s wife) is “the funniest person I’ve ever met.” Which of course, was throwing down the gauntlet in front of Krasinski.  He tried to change Kelly’s mind (we can only imagine the hijinks) but it was confirmed at the end of filming that Blunt is still the funniest person Kelly has ever met. 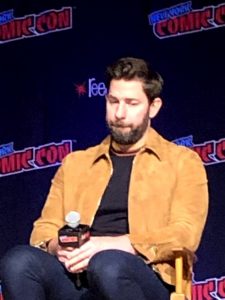 It was noted by the panel’s moderator, Rapace’s character, Harry, was “so fascinating because already in the first episode she has, like, 2 or 3 names.”  He asked Rapace “what was it about Harry and her history that was most intriguing to play?” Rapace said she had “never come across a character like her before, with a lot of layers and you don’t know what game she is playing.  Is she good, or….?  I love that she is not predictable and gives me a chance to dig deeper and deeper.  She is a survivor.  She is strong. She is funny.”  Fun fact:  Harry speaks six languages.  Rapace speaks only “4 or 5.”  I speak one, but I can order food or beer in 3.  How about you?

Season 2 was filmed in Columbia, London, San Diego and New York.  It was a massive production but according to the cast, it felt “very intimate and like a family.”  The respect and friendship between these three was obvious during the panel.  I can’t wait to watch the rest of Season 2 beginning November 1 on Amazon!!

Here’s what Amazon wants you to know: Tom Clancy’s Jack Ryan Season Two, is a co-production of Amazon Studios and Paramount Television and produced by Skydance Television, will premiere exclusively on November 1, 2019 on Amazon Prime Video. In the second season of Tom Clancy’s Jack Ryan, after tracking a potentially suspicious shipment of illegal arms in the Venezuelan jungle, CIA Officer Jack Ryan, portrayed by John Krasinski (A Quiet Place), heads down to South America to investigate. As Jack’s investigation threatens to uncover a far-reaching conspiracy, the President of Venezuela launches a counter-attack that hits home for Jack, leading him and his fellow operatives on a global mission spanning the United States, UK, Russia, and Venezuela to unravel the President’s nefarious plot and bring stability to a country on the brink of chaos. In addition to Krasinski, the second season of the dramatic series also stars Wendell Pierce (The Wire) as James Greer, Noomi Rapace (Prometheus) as Harriet ‘Harry’ Baumann and Michael Kelly (House of Cards) as Mike November.