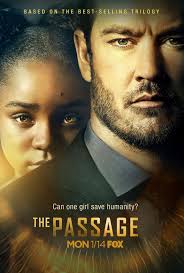 I was hesitant when I started watching The Passage because I never was one of those girls who went through a vampire phase. I went through the Nicholas Sparks phase instead…However, I was captivated by the pilot, which almost never happens. Pilots can definitely make or break a show, and The Passage certainly exceeded my expectations.

Here’s why you should be watching the show:

Tim Fanning creeps me out every single episode. Nonetheless, I still find myself watching each week. Just like the creepiness in Bates Motel, which I loved, this show weaves it in a way that’s not over the top. Some shows try too hard to be creepy, but I think this show has the creep factor down pat.

This show makes you feel for the characters. In the last couple of episodes, we’ve learned the backstories of those being tested and who were on death row. Even though they committed vile acts, I find myself feeling bad for them. Carter was wrongfully accused, as we learned last episode, so I really feel bad for him! He’s innocent, but the blame of his girlfriend’s death fell onto him.

The good guys, such as Amy and Brad, are such likable characters. Their bond is so cute because he has become a father figure for Amy, and she never really had that. We’ve seen time and time again that Brad would do just about anything to protect Amy, a girl who he barely knows but wants to protect her.

I’m still not quite sure about Dr. Lear yet. There’s something about him that I can’t put my finger on quite yet, but I think he’s probably alright. Fanning, on the other hand, is CREEPY, as I said before. I definitely don’t trust him at all. Obviously.

The pacing of the storyline

With shows like this, it can sometimes be hard to keep a pace that isn’t too fast or too slow. I think what The Passage excels in the pacing of the storyline. It’s been steady, which works in their favor when they’re still setting up the backgrounds of characters and the experiment.

The cast is awesome

I had the pleasure of interviewing the cast at San Diego Comic-Con last summer, and they were a great time. (Mark Paul Gosselaar and I talked about photobombing other journalists in the room…)You could tell that they were excited about the show and what was to come. At the time, it was still half a year out, but I knew when I talked to each one that this show would be captivating. Casts can either make or break a show, and I think everyone who was cast was cast perfectly.

So, if you’re looking for a new show to watch, look no further. It has great characters, a riveting storyline and enough creepiness to keep you on the edge of your seat.