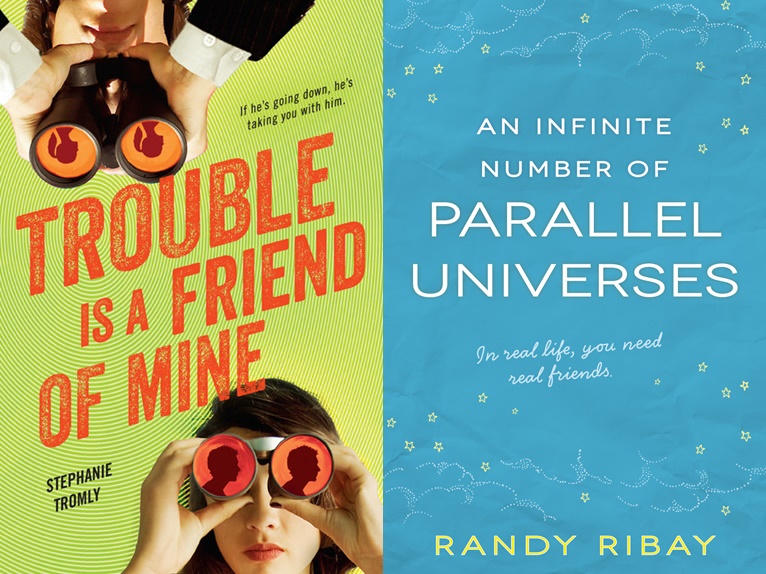 As part of our celebration of Filipino American History Month, YA authors Randy Ribay and Stephanie Tromly are here to take the podium and talk about their upbringing, how their identity shaped their lives, and the inspiration behind their books.

Randy Ribay’s debut novel, An Infinite Number of Parallel Universes, is told from the shifting point of views of four friends who are united by their love for a game called Dungeons & Dragons. It’s a multi-story about navigating your teenage years. It tackles hard hitting issues such as cultural identity, sexuality, adulthood, and more. It is geeky, and lyrical. It has the same timbre of Adam Silvera’s storytelling. It is necessary with so much heart.

When people ask where I am from

When people ask where I am from, I do not have a simple answer. My father was born and raised in Bicol, but my mom was American. I was born in Manila (supposedly delivered by Imelda Marcos’s OBGYN…), and lived in Bicol with my lola and lolo until I was one-year-old when my parents moved our family to the United States. We lived near a robust Filipino immigrant community in Detroit. I played in a Filipino youth basketball league where vendors sold siopao. My parents dragged my siblings and me to parties where we played with children we didn’t know, ate lumpia and pancit, and listened to adults speak a familiar but indecipherable tongue.

However, that was probably the extent of my connection to the country. I did not speak Tagalog, our extended family on my father’s side all lived abroad, and I did not return to visit for a number of years. In the suburbs outside of Detroit where we actually lived, I knew of one other Flip kid. If you asked me at that point in my life, I would not have identified as Filipino American. I was steeped mostly in white American culture.

At the same time, I never felt like I was part of it. I was keenly aware of how much shorter I was than my peers, how my hair would not conform to the popular styles, and how much I did not look like Zack Morris from Saved by the Bell (the epitome of cool during my childhood). As a result, I think I developed an identity as an outsider which would eventually become the focus of my fiction.

My stories tend to center around those whose stories we don’t typically hear. In my first YA novel An Infinite Number of Parallel Universes, my cast is a group of friends—mostly people of color—who play Dungeons & Dragons together. In my forthcoming novel After the Shot Drops, I tell the story of two friends who live in an American inner-city. My current work-in-progress—the weirdest one by far—focuses on a girl who lives in a Manila cemetery, a boy who is part of a cult, and a talking goblin & whale. I tell the stories of those on the outside, and I try to show the complexity and nuances of their experiences. I do not write in one genre, and my books never have a singular protagonist. Multiplicity will always be part of my fiction because it is inextricable from who I am.

Ribay is part of the anthology titled ‘Welcome Home‘ by Eric Smith, out on 2017. He also has an upcoming YA book, ‘After The Shot Drops,’ slated for 2018 release.

Stephanie Tromly’s debut novel, Trouble is a Friend of Mine, is a charismatic, delightful YA mystery about newbie girl Zoe as she navigates her high school life. The prose is filled with sass, it would hurt your stomach from laughing. You will ache and beg for more stories about Zoe and Digby’s adventures. Perfect for Veronica Mars and Sherlock fanatics.

The inspiration behind Trouble is a Friend of Mine

I’ve been asked a lot where the story for Trouble is a Friend of Mine came from and I’m not kidding when I tell people that I came up with Zoe and Digby during a long and miserable Canadian winter when I was trapped indoors with my newborn. I needed to do something to keep my mind from destroying itself so I looked out my window and played what-if with what I saw. A mansion, a cult, a small high-crime city with a problem with disappearing girls, and a wildly rich ruling class that’s socially and economically removed itself from its surroundings…it was all there.

I’d never say any part of the writing process is easy—I find writing agonizing, to be honest—but the two characters had a certain built-in rhythm that played itself out in a three-structure act so as stories go, it was a good choice for me to take on as my first book. I just took all the anxiety and energy the cabin fever generated in me and poured it into Zoe’s experiences in River Heights.

What Tromly would like to see more in YA

I’ve also been asked what I’d like to see more of in YA literature. Well, it’s natural that given I’m a minority here in North America, I’d like to see more racial, socio-economic, and gender diversity represented in the culture I consume. I hope to make my own contribution one day but to be honest, the few times I’ve tried, what’s come out is more anger than art.

So, to this important list, I’d like to add something more general but just as important (I believe). I recently read somewhere that there’s very little literary fiction that represents the reality of work. In the same way, we YA writers do a lot to prepare young adult audiences for things like love, loss, painful betrayals, etc., but we do much less to help them imagine the time they’re going to spend walking between those peaks and valleys of their emotional lives. Doing work, physically being at work all day long, handling their money, building a satisfying emotional life in the few hours they have outside work…these issues will take up so much of their adult lives. Where’s the fiction that will help them start thinking constructively about all that?

Self-help books that promise to teach fulfillment are bestsellers but I think if we all started talking about this stuff earlier, we’d all be better off. Who knows what that YA book would look like, though. Like I said, adult fiction isn’t doing such a great job depicting this aspect of lived reality, either.

The sequel to Tromly’s debut novel, Trouble Makes a Comeback, hit on shelves this November 22, 2016.