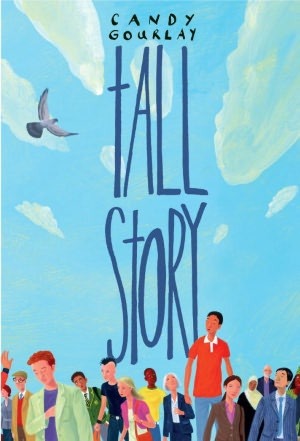 In all the years that I’ve been actively reading, this is the first time I’ve read a book where the characters are Filipino, where the majority of the story is set in the Philippines, where my culture is breathing and so alive.

Bonus: Tall Story is also written by a Filipino author.

It’s incredibly cruel. And it says so much about our publishing industry. We need more diverse books. We need more marginalized authors with unique stories to partake. And we need you to champion them just as much as you do for your standard default books.

‘Why would a giant shudder?’

‘Regret, of course.’ Old Tibo would shake his head sadly. ‘All giants regret that they had to leave Heaven to be with their mortal mothers.’

I’ve been a voracious reader as long as I can remember. At a young age I started devouring classic Filipino short stories about folklore from Sari Manok, the different tales of how Makahiya and Mount Maria Makiling become, The Story of the Piña, Ibong Adarna, The Monkey and the Turtle and more.

These stories molded me.  These characters are my people. They are my home.

“Don’t be surprised now, Andi, your brother is tall. Tall, you hear me?”

Tall Story follows the life of Andi, a thirteen year old girl who is obsessed with basketball. She is persistent and wants to be her school’s new point guard. She is equally hoping her half-brother, Bernardo from the Philippines will be a fan as much as her.

Then he strutted off from the plane.

And yep. He was tall.

He is an eight foot tall, sixteen year old boy.

And from where he grew up, he is heralded as a “hero.”

Because of his unusually long limbs.

And the old legend about Bernardo Carpio, the giant who once saved their village from an earthquake.

I could easily guess this would be one of my longest reviews in a while. I will try my best to highlight every bit of selling point. To help with that, here’s the short bullet list of what I’ll be discussing.

The characters are well-crafted. They speak to me. I love Bernardo’s intimate relationship with his Aunt and Uncle, with his friend Jabbar and the way he interacts with his fellow countrymen. Bernardo’s relationship with his mother and half-sister, Andie is fascinating. I adore that Bernardo and his mother converse in Tagalog, their fierce love and regard for each other is heartwarming. And because Bernardo and Andie didn’t have plenty of time to get to know each other before, there is strangeness coming from Bernardo. He didn’t know how he would approach his younger sister who completely grew up with a different upbringing than him.

Andie, on the other hand has pent up resentment coming from her side which she will soon find a way to understand. Gourlay delivers this situation and difference very well.

The villager’s strong belief in superstition is extremely amusing to me because I know most Filipinos still follow the traditional ways. It is true and my whole clan is a firm devotee. There is indisputable intersection between Filipino culture and our strong belief in folklore and history. We are very protective of this. They’re as good as the gospel of the Gods.

Once again, Gourlay balances the firm culture of the story, the magical voice of the narrator and the scientific reason. This is what makes this a brilliant story. Everything is effortlessly woven together.

Andie, our thirteen year old female character isn’t exempt to sexism. At such a young age, she has a handful of people discouraging her from achieving her dream.

“It’s not the ideal career for women.” her mom says.

“We don’t have a basketball team for girls.” The captain of the boy’s team says.

But that didn’t stop her from persevering and showing everyone she can do it.  This is a wonderful message to partake to everyone, especially younger kids.

How were my new classmates going to react when I stepped in through the door? Would my legs fit under those desks? Would they laugh at my broken English? I had not slept a wink the night before, worrying.

Aside from the constant alienation Bernardo experiences because of his height, he starts thinking about how his classmates will perceive him, because of his “broken” and unusual English.

This left a mark on me.

How many people who don’t have English as their first language feel the need to change their accent because theirs isn’t the norm? Because it seems embarrassing and they are ashamed? Because it doesn’t conform to the standard of western culture?

Plenty. There are hundreds. Thousands. Millions.

That bullshit needs to stop.

I am tremendously happy Tall Story discusses this in such a manner.

At this point, if you’re not clamoring for this book I don’t know what to tell you anymore. Tall Story is a book I would heartily recommend to young readers and up.

Kerly Sue is a self-proclaimed book reviewer and contributing writer at Hollywood News Source, formerly known as Young Adult Hollywood. In addition to being a full time book junkie, Sue also runs the first fansite forVampire Academy’s Lucy Fry. When she’s not tucked between the pages of her books, you can find her screaming like a banshee on her personal blog. You can also follow Kerly Sue on her bookstagram account.