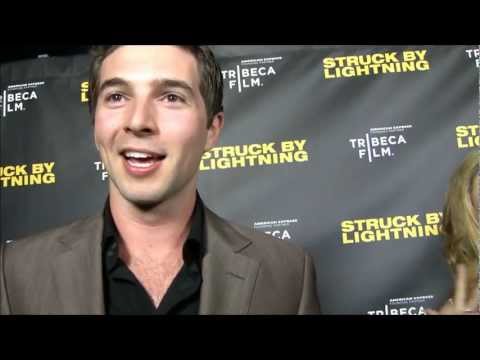 Young Adult Hollywood: Hi Roberto! Thanks for taking the time to chat with us. I checked out the new Struck By Lightning trailer and it looks great!

YAH: How did you get involved with this project? Had you read the book beforehand?

RA: Actually no. The idea for the book didn’t come until around six months after shooting wrapped on the film. The book was inspired by the movie but the whole idea of it was inspired when Chris was in high school. He had an assignment to write a story and this was one of the stories he wrote. The idea has been in development since them. Once it became a script I had a chance to read it. That is what got me hooked on it. From there I met with Brian Dannelly, the director, who was already on board and David Permut who is one of the producers. I met with Chris (Colfer) and everything just kind of fell into place.

RA: Oh my God..we were so lucky! When we were going through the process we were so lucky to have all the actors who jumped on board. I think that is mostly due to Chris. When you meet him he is so open and generous and invites you into his world. This story is something he is so passionate about and when you hear him talk about it, it’s infectious and I think that is how we were able to attract the cast that we did like Dermot Mulrony, Christina Hendricks and Angela Kinsey. It was amazing to get that kind of cast!

RA: Yes, I love Rebel. I’m in love with her..I have asked her to marry me a couple times! (Laughs)

YAH: She is so mega talented..unbelievable.

RA: She is! She has sold a movie idea to Universal already in addition to the pilot she is doing…she is amazing.

YAH: I knew she was working on a pilot and I cannot wait. I think anything she does is amazing!

YAH: You play Emillio in Struck by Lightning. Can you tell me a little about your character.

RA: He is the school womanizer. He seduces all of the girls in his school, the girls his age and all the ones older..(laughing). Throughout the movie you see him use his Spanish to woo everyone and you see him with this beautifully coiffed hair that stretches three feet up on his head. He was so much fun to play. I had a blast playing this character!

YAH: From looking at the trailer it looks very funny. I understand it’s very touching also but it sounds like your role was very comedic.

RA: The funny thing is my character was not originally in the script. My role was originally a Hungarian foreign exchange student who would pop up throughout the movie and say “I love America” and so I auditioned for him and Chris met me and had this crazy idea for this El Salvadorian foreign exchange student who was the seducer of the school and he added him into the blackmail circle so it became this very funny role. You will see throughout the movie.it gets ridiculous..the people you see him making out with is just crazy..it’s so funny.

YAH: That must have been a tough job for you..having to make out with girls throughout the film..

RA: Yes. It was SO trying but sacrifices have to be made..

YAH: For art you have to do that…

RA: Of course, of course..only for the sake of art do you have to do that! (laughs)

YAH: I noticed you have a producer credit on this film. How did that come about?

RA: After I auditioned with Brian Dannelly (director) and I also met with David Permut who is a producer and we immediately hit it off. He is a great guy, extremely knowledgeable after having done so many films. He was very inviting into the process and he and Chris were ultimately the ones who came up with the idea of me jumping on board as a producer. I really didn’t have an idea of what a producer did and so I jumped on board and they said this is what you are in charge of….

YAH: What a great opportunity

RA: It was a great responsibility but was hugely enriching because you get to oversee an entire project and get to be a part of every creative and financial decision. You help it through all the problems, celebrate it through all it’s achievements. It’s almost like having a child..although I wouldn’t know about that experience just yet. When people see it and enjoy it and love it, it makes it so much more of a meaningful experience.

YAH: Not only is it a great experience but I would think it would help you to understand the other side of a project the next time you are only acting vs acting and producing.

RA: Yes, you hit the nail on the head. You become so much more aware of what the production requires from you as an actor and you become more sensitive to issues that might arise during production. You become a lot less impatient because you understand more what is going on and the obstacles that come up. It does make you a better actor because you are more aware.

YAH: Did you get the bug a little bit to do more producing or directing. Do you prefer to do behind-the-camera work or in front of the camera work at this point?

RA: For me, it is definitely in front of the camera. The bug that bit me for acting is huge..it’s a big bug so definitely acting. I would love to produce. as a producer you gain a lot more control of your projects and you get to dictate the fate of your projects a lot more. As an actor you really go in, do your work and then get to see the final project. You really don’t get to influence the final project. At this point, I want to keep producing in the back seat and move full steam ahead with acting.

YAH: I did notice in looking at your bio that you did a lot of theater work?

YAH: Some people love the stage because it is very pure, it’s their home and then some people prefer to do film/tv so they can have multiple takes vs the live performance that you have to live with. Do you have a preference? Is there one you are more comfortable with?

RA: No actually. I think they are both completely different beasts. Both of them are great. I think in both you get to live through another character’s life and live in their shoes. They require different skills and different techniques. In theater, like you said, you only get one take. Because of that you get to build up to a climax..you get to live for two hours in this character so I think you become more easily entrenched in the path of the story where as in television/film you do have to turn it on and turn it off. You might be in your trailer for a couple hours, and then suddenly will be told you have to walk on the set and turn it on. That is also fantastic because you get to have multiple takes to get it right to give the performance you want.
The great thing about both mediums is you get to affect people, touch peoples lives, impact people in a certain way. In the theater you get to affect 1500 people in an audience every night, on TV you get to do it on television screens across the country and in film you get to do it on theatrical screens around the world. In each case you are having an effect on people and I think that is where actors are very valuable. People live certain experiences through watching theater, through watching TV and they might experience things they might otherwise not through their normal lives. To me that is what makes acting so special.

YAH: Who is doing work now in the field that is on your wish list?

RA: If I had to give you my entire list I think you would fall asleep! There are SO many talented people out there.
I saw Silver Linings Playbook yesterday night and if I could work with Jennifer Lawrence that would be amazing!
It’s such a special movie..Bradley Cooper and Jennifer Lawrence just pull out these totally amazing, creative characters. I think if you met them in real life you would immediately run away but since you are watching them on screen you just want to watch and see what they are going through.

In terms of directors, I would have to say Guillermo del Toro..working with him I think would be beyond belief fantastic. he is such a  visionary and I am such a fantasy geek at heart. I think he does such justice to the genre. I would love to be part of his creative world.

YAH: What is your favorite film that he has done?

RA: It would probably have to be Pan’s Labyrinth…for me that project was so amazing. I’m a little biased too because I was lucky enough to be able to go on set for a couple of days and meet him and that was a beautiful experience to actually see him working. He keeps notebooks full of ideas and he showed me a couple of them. I was like a  step away from being in his world. I was like take me, put me to work. He is phenomenal!

YAH: Thank you so much Roberto for taking the time to chat with us and I’m so excited to see this new film Struck by Lightning!

Struck by Lighting is in theaters this weekend (January 11th) and can also be seen On Demand and ITunes.

YAH caught up with Roberto at the Struck by Lightning premiere in LA last weekend! Here is our interview in which he teased the project with Robin Williams that had not been announced at the time!