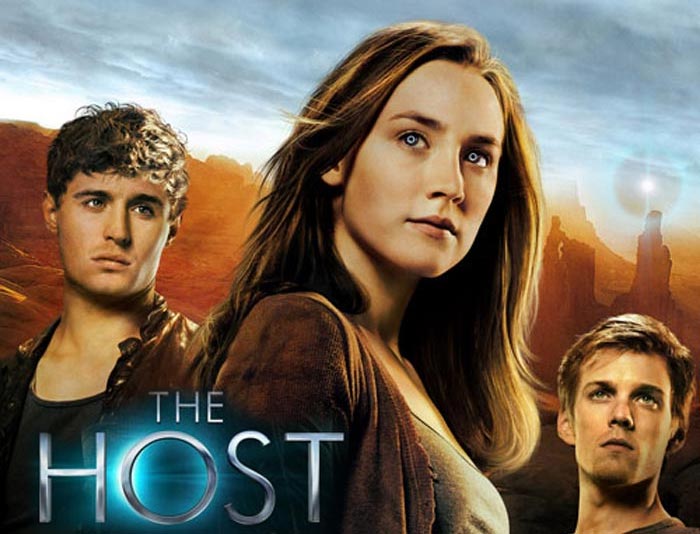 YAH had the opportunity to chat with actress Saoirse Ronan (Melanie Stryder/Wanda) at
The Host Press Junket earlier this month. Saoirse talks about the challenge of playing two characters, the burden of wearing those contacts on set and working with legend William Hurt in the film.

How do you plot out leaving enough time for the voice over lines when playing two characters?

It was down to the sound department. They would operate when the lines were being fed to me. No one on set could hear what was being said into my earwig that I had. I don’t really know because I was never looking in that direction but I think Andrew (director) might have cued them when to give me the next line. That was a big question for me going into this ..how they were going to do this..were they going to have someone on set and how they were going to figure that out. It worked out a lot better than any of us anticipated. Me and Andrew were the only ones who knew the lines were being fed and when.

Did you think you were going crazy?

Laughs. I talk to my self so much anyway that it was just like a normal day. It was a very natural thing for me to talk to myself.

No matter how many times we talk to the Twilight cast they always talk about the priceless experience of having Stephenie Meyer on set. How was it for you having Stephenie on set for this film ?

She’s very supportive in a way that is helpful. She doesn’t impose herself too much. She was always on set. More than anything, because I became so close to her personally and consider her a friend, I could go to her and talk to her about the characters and the film or talk to her about any worries that I had. She was very much there for me as a friend and that was wonderful. I’m sure she was there for the Twilight cast as well. She’s not a typical author who just hands their book over and steps away completely or is never happy with anything that film production does. Stephenie understands what film production does, she understands that sacrifices need to be made when a book is being adapted into a film. She knows that already because she has been doing it for five years with Twilight so she has that kind of understanding and now she is a film producer so she is much more than the author of the book. She is now there to support the whole filming process.

How much did you turn to the book when creating the character or was it more about the words on the page of the script? How do you balance that?

It’s more of the script for me. I read the book before filming but I found that whenever I have questions I refer to the script. I have found that when doing films adapted from books that for me I always turn to the script before the book. That is what I did with this. It was great to read the book for this because it’s huge and there is a lot of detail and padding to that story, a lot of back story to the character and that sort of stuff so I did find that helpful before we began creating the characters.

How were the eyes done? Did you wear contacts or were they digitally altered afterwards?

They were contacts. I think it would have been unbelievably expensive to put them in digitally for the entire film. I had tried contacts on for Atonement years ago but I hated them. So when I heard I would have to wear them for this film I was concerned that I wouldn’t be able to get over not putting things in my eyes. I tried them on and you have tunnel vision basically until you get used to them. I couldn’t see anything in front of me for the first few days and I was really worried that I wouldn’t be able to act properly because I couldn’t see anyone but my eyes adjusted within a couple of days. They are constantly having to use drops. There was a lens tech on set who was there for myself, Diane (Kruger) and the other guys wearing the contacts. I would have 50 drops in my eyes per day just to keep them hydrated. He was so good at it that they didn’t have to redo my makeup.

I heard you were involved in the casting of Jake Abel and Max Irons in this film?

I actually was and it was my first time being involved in casting in any capacity. I was quite excited about it.

Was there anything specific you were looking for in casting those parts?

A good actor (laughs). Obviously it wasn’t just up to me. It was more Stephenie and Andrew’s decision. One of the things I was very adamant about was….I know they have to be very attractive guys and everything..but they have to be able to play characters believably and not just be a good looking guy. Thank goodness we found that with Jake and Max. I had met them a few years before we started shooting. I met Max at an audition and Jake was in The Lovely Bones so I had met them both before and I know who they both were. I was delighted because I knew they were both great guys and we would have a great time together.

I was curious if you had talked to Stephenie Meyer at all about Byzantium or if she has seen it at all yet.

I don’t think she has seen it yet. I know she wants to see it. I haven’t really talked to her too much about it. When I told her I was in a vampire film she was like REALLY? (Laughs) It’s not Twilight, it’s a different one. I think she’s excited about it. It’s coming out soon.

Was it difficult to play two very different characters throughout this film?

It really wasn’t difficult. It’s really set out in the book and script who these characters are and how different they are. I think it’s really great that Melanie is so feisty and has such a mouth on her. She is a real fighter and very human. Wanda isn’t. She is very serene and positive about things and always keeps her composure and doesn’t have those kinds of impulsive human reactions that we have to things like being locked in a cell and being taken away from the creatures you are used to and all that kind of stuff. I very much enjoyed playing Wanda because of that. You really have to keep an eye on when naturally you would react in a certain way you couldn’t with her because you have to keep everything very controlled because it’s not in her character to do that.

Can you come up with a term to describe the love relationship? It’s not really a love triangle.

I know! We are saying it’s a love square or rectangle or parallelogram. I quite like that one..You can take your pick as long as it has four sides.

As a young actress I’m wondering what you took away working with William Hurt?

I loved working with William so much. I really did. He is such an experienced actor. Not only has he done amazing films but he has done theater as well. I think because of that his work becomes very supportive. He really wants to support the work and the other actors. Having someone like that on set who took it so seriously and cared so much was great and he really took the lead whenever he was around. There were times, like on every film, the schedule is pretty tight and you are pushed to make the day. I remember there was one day when we were doing this big scene where I bring medicine to treat Melanie’s brother who is dying and there are 7 or 8 of us in the scene. I remember we rehearsed it a few times and then got straight into it. It wasn’t really working and when William sensed that he said let’s just stop for a minute and breathe. We rehearsed it, thought about it, and went over it for about 30 mins which is unheard of in the middle of the day and it was better because of it. That was because he sensed that it wasn’t working. He had the commitment and made the decision to do that. I loved working with him. One of my favorite scenes is when he comes into the cell and apologizes for what they have done to the souls. We didn’t really look at each other, we looked straight ahead throughout the scene and it was great.

How were the cave scenes filmed?

They were filmed on a stage in Baton Rouge. It took about 10 weeks to build the set. It was great to have a tactile set to really dig into. It was nice.

Are you prepared for a franchise?