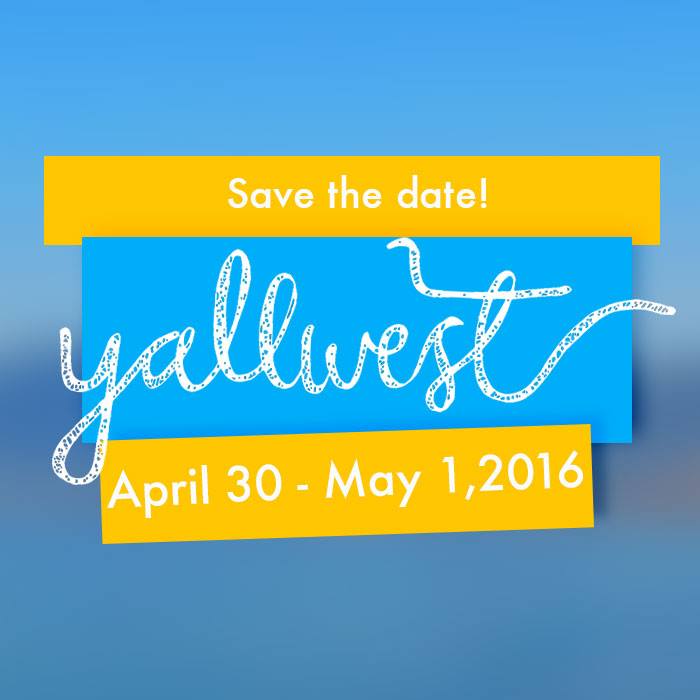 You can read the full press release below for more details.

SANTA MONICA, CA, February 17, 2016: April 29th to May 1st (2016) will see the return of the YALLWEST Youth and Young Adult Book Festival to the west coast. YALLWEST and its sister festival YALLFEST (based in Charleston, S.C.) are the biggest teen and middle grade book festivals in the country. In its inaugural year, YALLWEST drew over 8,000 attendees and donated thousands of dollars in book sale proceeds to school libraries in the Santa Monica Malibu School District, as well as hundreds of books to students in the Los Angeles Unified School District. YALLWEST remains largely free and open to the public.

YALLWEST Co-Directors Melissa de la Cruz (The Isle of the Lost: A Descendants Novel) and Margaret Stohl (Black Widow: Forever Red) along with 2016 Festival Chairs and founding board members Marie Lu (The Young Elites) and Tahereh Mafi (Shatter Me) are now partnering with area schools from Pasadena to San Diego, as well as a Youth Ambassadors Board of fifty local students, to plan an even bigger celebration of reading and the arts. “We have one mission—to get books into the hands of kids, and to say the words that will get them to open them,” said Stohl. “We don’t care if it’s a comic book or a graphic novel or Shakespeare. Open a book, open up your world, then go out there and change the story.”

Following a Friday April 29th Preview Night at the Santa Monica Main Library, YALLWEST will span the weekend of April 30th – May 1st. Saturday and Sunday events will be held at Santa Monica High School, and will include 60 panels and more than 100 authors, including 62 bestsellers. 2014 Los Angeles

The new Story/Makers panel track, headlined by Marvel Comics Director of Content & Character Development Sana Amanat (co-creator of Ms. Marvel), offers a full day of panels with creatives from the world of videogames (Call of Duty), comic books (Squirrel Girl), adaptations (Star Wars), graphic novels (Nimona), animation (Wander Over Yonder, Adventure Time, Steven Universe, Avatar: The Last Airbender), YouTube (Strawburry17), television (How To Get Away With Murder, Homeland) and film (TFIOS, The Maze Runner) and celebrates the idea of story in all its forms. Other unique YALLWEST highlights include the wildly collaborative Middle Grade Storyball, the YA Smackdown variety show, the all-author band Tiger Beat, the UCLA Quidditch team, and the beloved Harry Potter is Lyfe Cosplay Panel. “Almost as popular as the In-N-Out truck,” laughed de la Cruz.

The full schedule will be announced on a couple of weeks. You can see the list of authors and artists attending here.