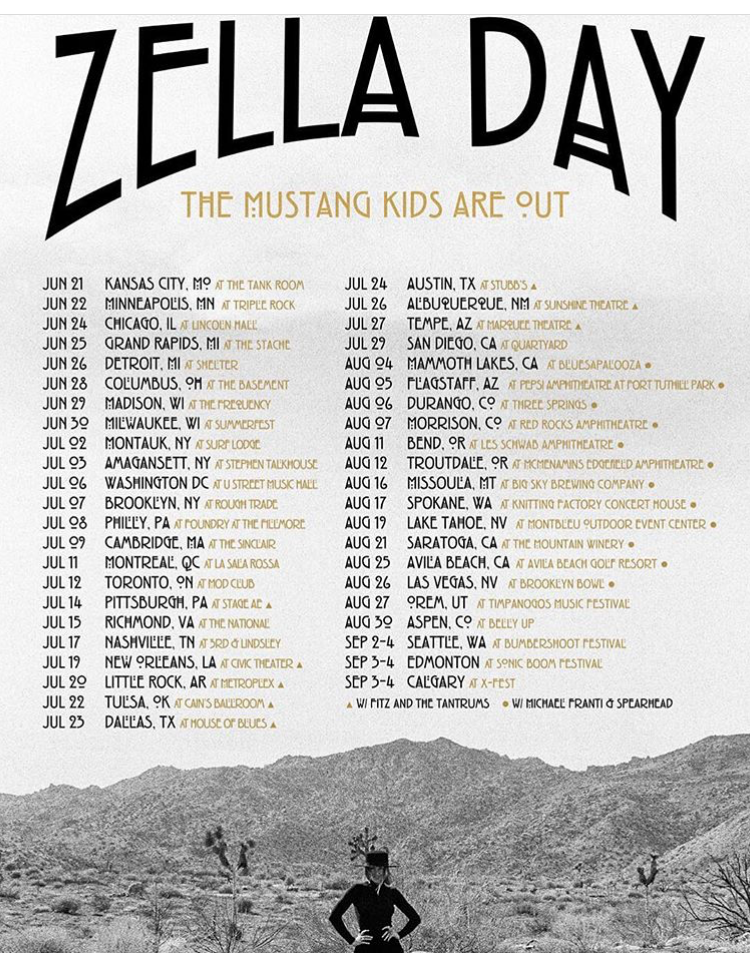 Zella Day Kerr (aka Zella Day – yes that’s her real name) kicked off her summer tour with the release of her much anticipated video for her single “Mustang Kids” featuring Baby E. HNS had the chance to see Zella perform when she came to The National in Richmond, VA, on July 15th. This was our third time seeing Zella after we thoroughly enjoyed both her Firefly 2015 and Coachella 2016 performances, so needless to say, we were stoked to see this up-and-coming star once again!

However, first to hit The National’s historic stage was a new and relatively unknown Nashville based band called Nightly. NIGHTLY performing at The National on July 15, 2016

Now, I hate to say it, but I find when I am at a concert for a particular artist it can often be a painful experience trying to survive the opening act(s), however, I was pleasantly surprised by Nightly! The frontman of the band stated that it was their first time ever playing in Virginia so we were automatically their favorite audience in the state (very cute). I was especially taken with what they announced as their debut single, “XO”. You can check it out here! I think you will agree these boys are going places and HNS will be following them closely in the future! Do come back guys, RVA loved you! In the meantime, you too can follow the band on Facebook, Twitter, Instagram, and Tumblr.

Soon it was time for the lady we had all been waiting for to take the stage and she instantly captured our attentions with “High”. Her hair in a braided crown atop her head, she was indeed living up to her rising status as “folksy pop” royalty. She wore a version of the Shadow Preacher Kaftan, a product of her recent design collaboration with Revolve and Cleobella. She seemed extremely proud of this project when describing the details to a fan after her show. You can purchase the Shadow Preacher Kaftan and all of Zella’s designs at http://shop.cleobella.com/pages/zella.

Zella performed nearly every song from her 2015 debut album “Kicker”, the only exception being “Jerome” I believe. There was even a last minute diversion from the set list to include Zella’s proclaimed favorite track, “Jameson”. She told the audience that whenever she plays the song “it takes her right back to the time that she wrote it.” Two brand new songs were also included, “Tigre”, which we heard previously at Coachella and “Man on the Moon”. Zella stated that these songs would be coming soon…Does that mean a new album?!!! We can only hope!!!

There was an encore with chants from the audience for “one more song” to which Zella complied with a performance of “Seven Nation Army”. Then came the real treat! Zella stepped down into the audience! She asked that cell phones be put away because this is always a “special experience” for her and she wanted to see our faces. She then proceeded to perform “Compass” with the crowd enveloping around her, hands swaying in the air except when they would reach for the chance to be held by the queen herself. I will never forget this.

All too soon the evening was over but my memories, timeless. Be sure to visit http://zelladay.tumblr.com/tour to see when Zella is performing near you and buy a ticket! You can also follow Zella on Facebook, Twitter, and Instagram. Band Guitars “Country Gent” and “White Falcon” packed and ready to be loaded for Zella’s next stop in Nashville, TN!